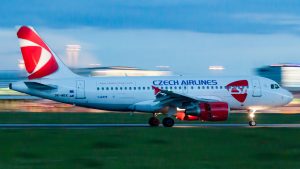 In the previous article, we introduced the basic model that the whole family is called Airbus A320. Today, we will be acquainted with its shortened version, which has become a record-size record, especially the British low-cost airline easyJet, which currently operates 135 units. The Airbus A319 is as popular and successful as its larger A320 brother.

The Airbus A319 is a nearly 4-meter truncated version of the A320 with minimal changes oriented on the short and medium track. With nearly the same capacity of fuel tanks as the A320-200 and fewer passengers, with 124 passengers in two classes, extended to 6,900 km, the largest in its class. Roll-out of the first machine took place at the Airbus production plant in Hamburg 24.8. 1995 and the first take-off the next day.

The classic Airbus A319 has on each side of the fuselage two entrance doors and one emergency over the wing. In 2003, easyJet ordered Airbus A319 with smaller kitchens (easyJet does not offer food during the flight) and 156 seats in one class, or 32 seats more than the A319 standard. In order to meet the evacuation speed safety requirements, two additional emergency exits above the wing had to be added.

Technical specification of A319-100 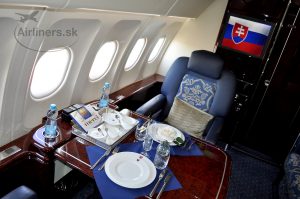 Since 1999, Airbus also has a corporate (business) version of A319. The main difference is the possibility of interior configuration, so it is suitable for many special uses from the transport of the injured on the bed, humanitarian flights to VIP clients with saloons and the maximum possible luxury and equipment. It has installed additional fuel tanks in the cargo compartment and thus has an extended range of up to 12,000 km. Upon eventual resale, it can be retrofitted to the standard A319, only by removing the added fuel tanks to maximize the price. It has stronger air conditioning and built-in stairs under the front door. The aircraft can carry up to 39 passengers, but as mentioned, the customer’s wishes can be delivered in any configuration. The A319CJ competes with other corporate aircraft like Gulfstream V, Boeing 737 based BBJ1 and Bombardier Global Express. It is powered by the same engines as the A320.

Today we can see these aircraft in the role of government machines in Slovakia and the Czech Republic as well. 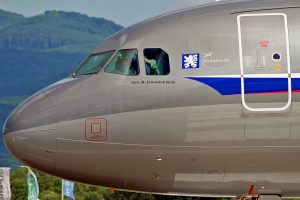 In the Czech Republic, two ACR Air Force units have been operating since 2007 and, as in ours, they have replaced Tupoleva Tu-154. These aircraft were ordered directly from the manufacturer and equipped according to the needs of the ACR. We have one such aircraft (OM-BYA) bearing the tricolor colors and the general mister M.R. Štefánik. It was made in 2005 and purchased in 2016 by the previous owner for a sum of about 42 million EUR. The Slovak Air Force One belongs to the Slovak Government Flying Services of the Ministry of the Interior of the Slovak Republic. It is equipped with the most powerful engines for this type and 9 000 km range, so it will fly smoothly across the ocean to the American continent. Up to now, our aircraft had to have an intersection in Iceland. Unlike the Tu-154, it has a variable interior, where it is possible in several hours to increase the number of seats to more than 70, or to install up to five beds in the cabin to transport the sick or, respectively, injured passengers and significantly lower fuel consumption. The aircraft in the past served the needs of Kuwait Sheikhs.

This version has all 48 seats in the “Business Class” – it was specially designed for intercontinental flights only by business class. The A319LR, compared to the A319CJ, has only four fuel tanks added instead of six. A typical range is 8,300 km, the longest in the A320 family (except A319CJ). It operates, for example, Qatar Airways.

At the end of March 2017, the first upgraded A319 neo, which could handle up to 160 passengers with all the improvements from the A320neo, was released in the air. An unquestionable attraction for air carriers will also be the promised fuel savings approaching 20%, and the interior refurbished for passengers, lower noise, better air conditioning filtration, and overall higher travel comfort. The first operator of this new version and the date of first service is still not confirmed. The aircraft is in the process of certification.

Please verify your settings, clear your RSS cache on the Slickr Flickr Admin page and check your Flickr feed

Singapore Airlines to get rid of 5 Airbus A380 aircrafts

Simulator of Boeing 737NG in Bratislava